Flooding: How Can Cities Be Prepared for an Increasingly Unpredictable Future?

2018 was a year of unprecedented global weather events. In Asia, Super Typhoon Mangkhut brought close to $50 billion in damages to Hong Kong and China, on top of $16 to $20 billion it exacted from the Philippines (Yap et al., 2018), while extreme precipitation-induced flooding in Kerala state killed at least 350 people and displaced over 800,000 (Kotecki, P., 2018). Meanwhile, 2019 started off with a historic deep freeze in the United States, brought about by unusual polar vortex formation (Channel News Asia, 2019).

Causes of climate change has long been associated with extreme events and is the biggest threat to the planet as reported by the World Economic Forum. Unless drastic changes are made to prevent global temperatures from rising more than 1.5 degrees Celsius, it is likely that we will continue to witness such events with increased magnitude and frequency. These events will continue to interact with complex systems, eventually set off their own ripple effects in a cascading manner akin to toppling dominoes (U.S. Global Change Research Program, 2018).

In the face of global climate change and diminishing natural resources, designing today’s cities and buildings require environmental, economic, and social considerations. The Rio Earth Summit in 1992 saw Sustainability at the forefront of many global policies aiming to minimize impacts on the environment. While Sustainability focuses on how we can slow down effects of global warming to the Earth, there is also a pressing need to look into the aftermath of warming – that has long been associated with extreme weather events. This is where we enter a new field known as “Resiliency”.

For the past 20 years, climate-related calamities accounted for 91% of all disasters, with floods topping the list at 43%. Direct economic losses within this period due to climate-related and flooding specific disasters brought about US$2,245 billion and US$656 billion worth of damage respectively (Crunch, C., 2018).  In terms of property value, a study by First Street Foundation (2019) has found that property values on the East and Gulf coasts of United States have reduced by $16 billion due to flooding threats, signalling that the market is already reacting to such disasters. Recent research in the field of attribution studies has further demonstrated that the frequency, intensity, and duration of natural disasters will continue to increase due to climate change (Achakulwisut, P., 2019).

And how do all these impact our lives and homes? How will our cities deal with such uncertainties of the future? Are we doing enough to overcome the challenges that lie ahead while mitigating risks? – The field of “Resiliency” attempts to shed light on planning ahead for such possible uncertainties of the future. From a broader perspective, resiliency is defined by the capacity of individuals, communities, institutions, businesses, and systems within a city to survive, adapt, and grow regardless of the kinds of chronic stresses and acute shocks they experience (100 Resilient Cities, 2019). From a flooding perspective, it is about how cities can plan for a flood-resilient future.

In light of recent severe events, and the risk of them occurring again, it is appropriate to consider how to assess flood risks in order to reduce the likelihood of flooding, and robust planning for a flood-resilient future. Such an approach usually considers the 4-R model developed by the Multidisciplinary Center for Earthquake Engineering Research (MCEER) at the University of Buffalo in the United States, which describes resilient systems as one that encompasses the following properties:

Digitisation Enables Us to Predict Flood Risks Unlike Before

The World Economic Forum 2019 in Davos with Industrialization 4.0 taking centre stage focused on digitisation, which enabled the interaction of multiple layers of data to generate insights and predictions unlike before. Such approach towards flood resiliency will transcend current approaches, which are currently conducted in a siloed, non-repeatable, and non-integrated fashion, as well as address currently missing key considerations, from specific geographies to the timing of storms that introduces complex compound flooding (Begos, K., 2019).

Our approach leverages on a common Geographic Information System (GIS) platform that brings together a multitude of data accurately geo-referenced to a single point, providing the basis that makes interaction possible. Among the comprehensive list of data required (refer to Illustration A) for such an analysis are the topographical survey, building models, local rainfall, waterbody distribution, drainage network, and imperviousness data, that are most crucial for an accurate assessment.

While embarking on digitisation endeavours and relooking at traditional approaches, we should not neglect processes that have worked brilliantly for billions of years – that is nature. By safeguarding natural buffers, we can leverage them to enhance protective functions and confer disaster resilience. This is in line with the United Nations Disaster Resilience Scorecard for Cities (2017), as well as the Sendai Framework for resilient cities.

Since the last century, urban planning was focused on adopting a “pave, pipe and pump” methodology of stormwater management (Knight, S., 2017), discharging them into sewers as soon as they make landfall. Recent unprecedented flooding events across the globe with effects intensified by both climate change and urbanisation have demonstrated that such an approach is no longer relevant. A softer approach should be taken, as opposed to solely upsizing and re-laying concrete pipes and sewers for every new flooding hotspot that occur (refer to Illustration B).

The Next Frontier in Flood Resiliency Analysis

Given the high natural variability and underlying dynamics of climate, it is extremely challenging to model and predict flood risks. As such, before we can even consider flood mitigating solutions, it is imperative to consider how to precisely target existing and future flooding hotspots, evaluate the effectiveness of deploying a single or multiple arrays of solutions and quantify the before and after flooding risks to arrive at a practical solution. On top of quantifying flooding risks and evaluating suitable mitigating strategies, digitisation enables us to visualise flood water propagation throughout every stage to facilitate informed decision making.

When capacities of storm sewers, drains, and rivers are exceeded during a precipitation event, stormwater runoff will start propagating to low lying areas that can be visualised in a flood propagation animation that varies with time. Together with a flood risk map, this enables planners to precisely determine which zones are at risk, evaluate a combination of suitable mitigating solutions or re-locate critical zones to less flood-prone areas, effectively taking the guesswork out of their design. A demonstration can be seen in the figures below, showcasing “before” and “after” flooding risks. Such optimization can potentially save the many lives that have been lost in recent extreme precipitation events by putting effective measures in place beforehand. After all, investing in pre-event resilience building is more cost-effective than simply cleaning up after a disaster.

Illustration C: The City’s Flood Risks from a 1 in 50 Years Precipitation Event, Before and After Incorporating Mitigating Solutions such as LID and enlarged drainage pipe sizes. Multi-Coloured Spots Outlined in White (with the legend on the right) Demarcates Depth of Water Ponding. (Regions circled in RED indicates potential flooding hotspots on land. Regions circled in WHITE indicates the problem of flooding has been reduced/resolved.) 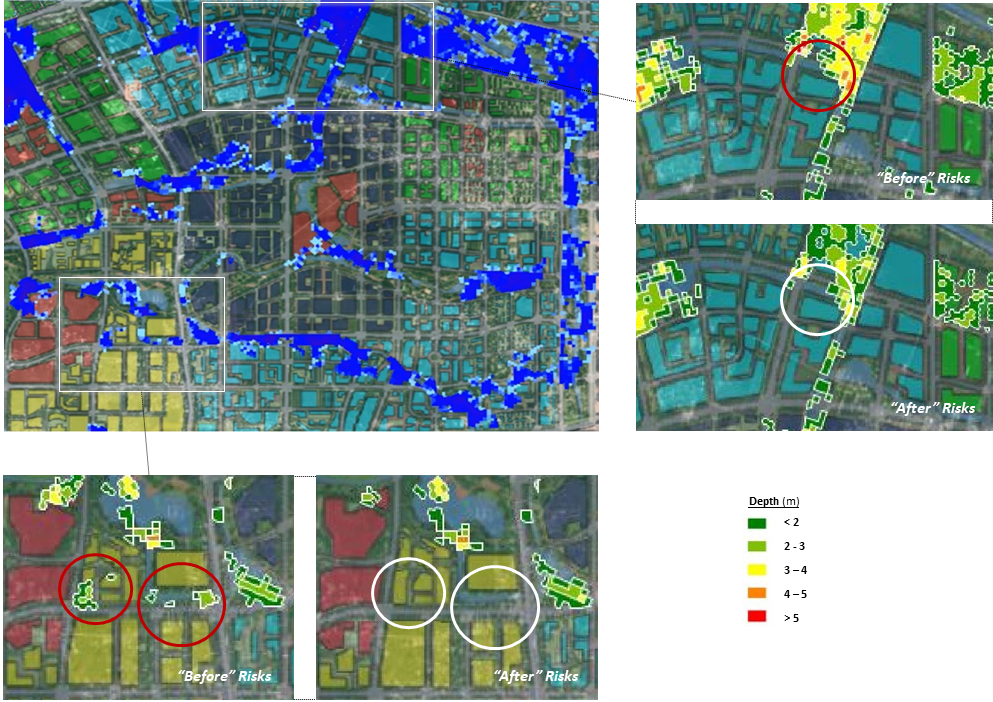 Flood propagation animation for an existing flood-prone district in Vietnam, showing how flood waters from an extreme precipitation event interact with site topography and buildings to propagate throughout the site. Red-coloured outlines demarcate the site boundary, while brown-coloured blocks represent buildings.

Our Smart Approach Towards Flooding

During actual deployment, real or near real-time sensors can be considered in conjunction with weather cameras to provide data to monitor flooding situations. Such data is first input to a sensor fusion platform which is then fed into our model, after which the output is visualized in the city or estate operations control centre for the controller to activate or even automatically trigger certain emergency processes such as evacuation, road closure or traffic diversion. Nearby safe shelters or medical facilities locations and information can be communicated to the public via mobile applications or roadside display panels.

Furthermore, the flooding analysis model can also be integrated into a digital twin of the physical environment to allow other systems to be built on it, interacted and tested to a certain confidence level before rolling out to the actual environment. This helps to continuously train and update the model with real-time information to make it more intelligent and robust for detection and triggering of future events. The flood analysis model can help to fine tune the placement of sensors through testing in the digital twin environment to increase the availability or accuracy of data or even better communicate to the public in the event of an emergency. Through this exercise, it helps the city or development agencies better plan and manages an emergency event from the input of data, triggering of actions and communication to the public. Ultimately, calibrated digital twin enables for far more effective real-time operational decision making and control, that also facilitates risk prediction and defining the best course of action to prevent communities from being taken by surprise (Begos, K., 2019).

Moving forward to a future with an increasingly uncertain climate, there needs to be a paradigm shift in the way cities are planned and designed, using such flooding analysis to provide certainty for our future cities to become flood resilient, and smart tools to provide real-time information to facilitate decision making. In doing so, we are not only building cities but also shaping the lives of those people who live in them.

Special thanks to Eugene Seah (Acting Head, Sustainability & Resiliency Office) who has sponsored the article, and to the following for their contributions:

Perspectives, developed by SJ Academy, is our platform to explore new ways of tackling some of today’s most complex challenges. We draw on ideas and opinions from our staff associates and experts across different businesses. Click here to read more about the Workplace of the Future, Urban Development, and Water Management.