Urbanisation has proven to be the engine of innovation that helped lift millions of people out of poverty. The more successful global cities of the world include New York, London, Tokyo, Hong Kong, Paris and Singapore.

How did these cities become and remain successful?

The Virtuous Cycle of Urban Development

Each of these highly successful cities enjoys what may be termed “the virtuous cycle of urban development” comprising talent, jobs and pleasure. A successful city is able to attract talents with good jobs and good living environment. When talents enjoy good income, they will seek contentment from external entertainment sources like cafes and art galleries. This, in turn, attracts good companies which are prepared to invest in business ventures, resulting in further job creation.

That said, some fundamental factors such as crime, connectivity, availability and cost of housing, and public health, may make or break this virtuous cycle of urban development.

In addition, recent emerging trends seem to also have an influence on the possibilities or challenges to the disruption of this cycle, namely:

(ii) increasing social divides in our cities; and

(iii) the need for balanced approach towards development. 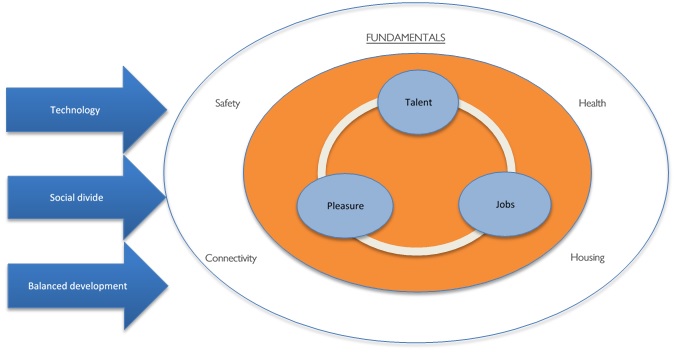 Technology changes everything. In the first instance, technological advancements in Artificial Intelligence, big data, robotics, bio-engineering and other fields, will disrupt and destroy many industries and give rise to many new ones. It will make some jobs obsolete and create new ones. Whether a city is able to develop or re-invent itself in the face of these disruptions and create opportunities for talent, this becomes key to the city’s vibrancy.

One example of a successful city is New York. In 1970s, the city became unattractive because of its declining traditional industries and increasing crime rates. Fortunately, New York was able to re-invent and establish itself as the financial capital of the world. In contrast, another city, Detroit, was unable to recover from the automobile industry regression, resulting in a population drop to one-third of it in 1950.

Technology will change the way cities are planned, designed, constructed and managed. For instance, architectural designs can be experienced in a life-like environment before actual construction through virtual and augmented reality. Digital twins of urban buildings can be mapped using Building Information Management Systems (BIM) and facilitate seamless transition from design to construction to maintenance. Surveys, site inspections and maintenance can be done using drones, and the list goes on. In order to stay ahead, companies offering services and products in the built environment will need to leverage on these new technologies to remain relevant.

A second challenge for urban development is the tension brought about by deepening social divides in cities.

The most successful cities are also cities where top talents earn top dollars. As more of these talents gather in the cities, they also cause prices to rise, especially in housing. If this is not addressed, there is a danger of gentrification – where the less well-off are pushed out of the city, or economic segregation where the rich is located in some parts of the city, and the middle income and poor are pushed to the less attractive areas, creating further inequality in opportunities.

b. Divide Between Long-time Residents and Newly Arrived Migrants

Often, there is a perception that these newly arrived migrants take away jobs and overload the city infrastructure such as housing or public transport. The issue can be further compounded by prejudices if these migrants are of different races and religion from the existing residents. Till date, immigration issues are still politically sensitive topics in many countries and cities.

c. Divide Between Long-time Residents and Newly Arrived Migrants
With lower birth rates and longer lifespans, the world will see a surge in population from 7 billion today to approximately 11 billion by 2100. Seniors above 60 years old will make up about 28% of total population, double of what it is today. Urban development will have to cater to the needs of the increasingly ageing population in many cities.

These are obvious complex issues that must be attended to, and through numerous government policies.  However, thoughtful urban designs can help alleviate some of these problems. For instance, in planning the housing estates, it is a deliberate policy to have some low-cost public housing next to high-end residential areas, so that the rich and the poor stay in proximity, thereby not allowing any concentration of the poor or slums to be formed.

In Singapore, the public housing agency also has an ethnic integration programme, where each public housing block has a specific quota set aside for the minority races based on their proportion in the population. This ensures that the different races live together and learn about one another’s culture and habits, and build greater understanding among the different races. There are also public housing incentives for three-generations to stay next to one another. And in the residential estates, the common areas are equipped with playground facilities for the young, and exercise facilities for the elderly – to encourage different generations to spend time together in the public areas.

Finally, the third challenge is about the increasing need to have a balanced approach in urban development as a society matures. People recognise that massive large scale and rapid development may not always be the best way to develop a city. We need to balance economic considerations against the desire to preserve our heritage and to protect our environment.
For heritage preservation, it requires urban planners to be creative and thoughtful in their designs, in selecting what is to be preserved, how old buildings are to be renovated and what new developments can be blended with the older areas to create a new vibrant landscape. For environment sustainability, it requires clever urban designs, leverage on new technologies and changing our habits. This does not mean that heritage must be preserved, and environment must be protected at all costs. Urban development needs to continue, but a careful balance should be struck.

People will continue to migrate from the rural areas to cities and from small cities to global cities – in search of better opportunities. While the fundamentals of urban development, namely, health, safety, connectivity and housing, remain relevant, we need to embrace new technologies, address increasing social divides and take a more balanced approach in our urban planning and development. If we do it well, we would be able to build better cities and shape better lives for all.

This article is co-created by Surbana Jurong Academy.

Perspectives, developed by SJ Academy, is our platform to explore new ways of tackling some of today’s most complex challenges. We draw on ideas and opinions from our staff associates and experts across different businesses. Click here to read more about the Workplace of the Future, Causes of Climate Change, and Water Management.