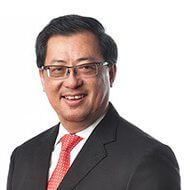 Mr WONG Heang Fine joined Surbana Jurong in 2015 as its Group Chief Executive Officer and Board Director. Since then, the firm has grown into one of the largest urban, infrastructure and management services consulting firms in Asia with a global talent pool of over 16,500 employees based in more than 120 offices in over 40 countries worldwide.

Mr Wong also sits on the boards of three of Surbana Jurong’s member companies – SMEC, AETOS and Sino-Sun. He is Chairman of Sino-Sun.

Mr Wong is a Board Member of the Building and Construction Authority (BCA), an agency under Singapore’s Ministry of National Development that regulates Singapore’s building and construction industry. He is Chairman of the advisory board for Nanyang Technological University (NTU)’s College of Engineering and an Adjunct Professor in NTU’s School of Mechanical & Aerospace Engineering. He is also a member of the Corporate Advisory Board of the World Green Building Council.

Mr Wong has held many key leadership positions across a number of industries over the last 40 years. Before Surbana Jurong, he was with CapitaLand for eight years. He was the CEO of CapitaLand Residential Singapore Limited and CapitaLand GCC Holdings, and also the Country CEO in charge of developing CapitaLand’s business in the Gulf Cooperation Council region. Mr Wong was CEO of Capitala, a joint venture company between CapitaLand Singapore and Mubadala Development Company in United Arab Emirates.

Mr Wong joined Cathay Organisation in 1998. As Deputy President, he helped realise the company’s ambition of going public via a reverse takeover strategy through IMM Multi-Enterprise which was listed on SESDAQ. In 1999, he was appointed President & CEO of Cathay Organisation Holdings.

Between 1996 and 1998, Mr Wong was Director (Infrastructure), L&M Group Investments Ltd. During his tenure, he restructured the company by spearheading diversification into the infrastructure and property sectors.

Between 1991 and 1996, Mr Wong was at Singapore Technologies Industrial Corporation. There he pioneered the infrastructure development of the industrial estate and a 24,000-hectare international resort belt on Bintan Island, Indonesia. He was instrumental in developing and managing the Bintan Lagoon Resort.

Mr Wong was the President of the Real Estate Developers’ Association of Singapore from 2011 to 2012. He served as a Senior Industry Officer with the Economic Development Board where his responsibilities included the promotion and development of investments in Singapore.

Mr Wong graduated with First Class Honours in B.Sc (Mechanical Engineering) from the University of Leeds, England and a M.Sc (Engineering Production and Management) from the University of Birmingham, England. He was conferred a Medal of Commendation during the National Trades Union Congress (NTUC) May Day Awards 2020 for advancing HR best practices and employees’ interests. Mr Wong is also an iBuildSG Distinguished Fellow, appointed by BCA, and a RICS Fellow, conferred on him by the Royal Institution of Chartered Surveyors.

More Than Four Walls and A Roof: Housing as an Anchor in Times of Turbulence