As the global population rises and increasingly lives in urban environments and megacities, planners and designers are being challenged to create and maintain a high quality of life for citizens. But liveable, sustainable cities can be a part of the future, if we focus efforts on the fundamental objectives – to create good jobs, quality housing, and an effective transport system.

The Rise of Megacities

In 1950, the world had only two megacities.  New York and Tokyo stood alone as cities with more than 10 million inhabitants. Fast forward to 2017, the world now has 37 megacities[1], many of which are found in Asia.

A city with a high quality of living is usually one that is safe, economically vibrant, inclusive and with active participation from its residents. However, this does not come about naturally. With the rapid rate of urbanisation, particularly in low-income countries, what we are more likely to see are cities with slums, high crime rates, and pollution.

While there are many aspects to the concept of liveability in cities, it is useful to go back to basics and examine what are the key criteria of a liveable city.

I believe that there are three fundamental “objectives” that any large city must deliver to ensure a decent quality of life for its inhabitants. These are

This is typically reflected in the land allocated to these “deliverables”. In Singapore’s land use master plan, for example, more than 50% of our land will be set aside for the purposes of industry, commerce, housing, land transport infrastructure, ports and airports by 2030. 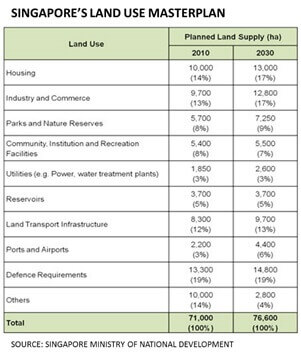 People flock to major cities in search of economic prosperity as the economies of scale and network effects in cities lead to more job opportunities. However, this alone does not guarantee that the jobs are high-paying or meet the aspirations of the residents. Instead, the city must leverage strategic and appropriate economic positioning as an important factor in its economic development – a process often requiring hard-headed analysis of the natural advantages and disadvantages of the city and the global trends at that point in time.

When Singapore became independent in 1965, it had no natural resources. But it had one clear advantage – its strategic location at the centre of major shipping routes. The trend of globalisation, where multi-national corporations were relocating or setting up their trading and manufacturing operations in different parts of the world had already started – albeit still unclear to many casual observers.

Singapore seized its locational advantage and rode the wave of globalisation. Over the last few decades, it has risen from a labour-intensive manufacturing base, and regional port to become the global business hub in Asia with a wide range of sophisticated trading, high-value manufacturing, and professional service activities.

The economic miracle has seen Singapore’s GDP per capita multiply 100-fold from about USD500 in 1965 to more than USD50,000 in 2016, among the highest in the world. Obviously, as a result, many good jobs were created in this period, and income for the average Singaporean improved significantly.

Besides a visionary leadership, a strong and united government bureaucracy, and pro-business government policies, the economic miracle was possible because of world-class infrastructure. In particular, to be a global business hub, Singapore needs a world-class airport, an efficient sea port, and well-designed industrial areas. Changi Airport will be opening its Terminal 4 soon and is already planning its massive Terminal 5[3] expansion. Similarly, to remain as the key maritime transhipment hub, Singapore is building a new port in the west. When fully completed, this will double the capacity of the existing port[4] facilities.

A unique infrastructure project in Singapore is the formation of Jurong Island, which is a S$7 billion amalgamation of seven offshore islands into a 3,200-ha world-class petrochemical complex. Today, Jurong Island is home to more than 100 manufacturing companies, employing 30,000 professionals. The project also makes better use of Singapore’s scarce land resources by storing bulk liquid underground in the Jurong Rock Caverns[5].

As people migrate to cities, meeting the demand for housing can quickly start to be a challenge. If not resolved, the price of decent accommodation reaches unaffordable levels, increasing the prospect of slums becoming a common sight.

While private housing should be part of the solution to housing demand, there is almost always a need for some public housing. As the name suggests, public housing cannot be left entirely to market forces. The government has to be involved heavily to make public housing work.

Singapore has a highly successful public housing programme with more than 80% of the population living in quality accommodation that is often the envy of other countries. In addition, public housing has become an appreciating asset for most Singaporeans.

The key success factors of our public housing programme are:

Firstly, land must be allocated for public housing early in the city’s development. The Singapore Land Use Concept Plans take a long term 50-year view that integrates various needs for the country. This is supplemented by the 10-year Master Plans which translate the concept into strategies. The Land Acquisition Act has been instrumental in this. From the outset, it has been a deliberate and carefully guarded objective by the government to retain land in Singapore for public housing. This includes land in the central area as well as land further away. Cities which do not adopt such an approach will quickly find that they run out of land for public housing.

Secondly, designs for public housing apartments should be varied enough to cater to different segments of the population. Unlike many cities, where public housing is meant for the poor, Singapore has taken the approach that public housing should be designed for all.

Thirdly, public housing needs to be financed. To this end, a strong economy and a balanced government budget are vital. In addition, Singapore has put in place a mandatory savings scheme called the Central Provident Fund which channels parts of the individual’s income into purposes such as housing, healthcare, and retirement. This fund works hand-in-glove with the public housing programme to allow the government to finance the development of public housing and for the residents to own them.

Lastly, public housing must be maintained, serviced, and upgraded regularly to prevent it from degenerating into slums. Government policies must be put in place so that there is co-sharing of such costs by the residents. Today in Singapore, much of this work is done by the Town Councils, which have started to apply smart technologies into monitoring various assets such as lifts in public housing[6]. Finally; public housing can be an effective vehicle to achieve greater social integration among different socio-economic and racial groups. Singapore has been very deliberate in its township planning, mixing smaller units with bigger public housing units, effectively encouraging groups with higher income residents to live next to groups with lower income.

As a multi-racial society, Singapore has also been careful to put in place policies to ensure that different races live together in the same area so as to promote better understanding and create greater racial harmony.

In Singapore, given the limitation of our size, we are steering our population to use more land-efficient modes of transport. As such, the Singapore public transport system is centred on the Mass Rapid Transit system, which transports 2 million passengers daily through 142 stations, with plans to increase the total distance from about 200km today to 360 km by 2030. This is supplemented by the bus network, which is also continually being enhanced.

Singapore takes a hard-nosed approach to addressing the negative impacts of car ownership. Through a combination of excise taxes on cars and fuel, electronic road pricing and a quota system which controls the number of new vehicles that are registered, Singapore has managed to keep its private car population under control. At the same time, through better designs that make it convenient for cyclists and users of other personal mobility devices, Singapore has tried to encourage a higher usage of these sustainable modes of transport. Singapore is also taking an open-minded approach towards new business models such as Uber and Grab, which may also help reduce the private vehicle population over time.

As an island, Singapore is linked by a causeway to Malaysia, and the road connection has been the key mode of transport between the two locations. There are now plans to enhance this by building the Kuala Lumpur-Singapore High-Speed Rail, and the Johor Bahru-Singapore Rapid Transit System Link. This will help connect Singapore to the nearest city to our north and allow Singaporeans to enjoy the benefits of agglomeration of cities.

The fundamental requirements of a city or mega city will not change. However, technology will significantly alter how these can be delivered in the future. The types of jobs will change as more industries are disrupted by new technologies and new business models.

Infrastructure such as public housing and transport system can be designed, built, and maintained more efficiently as we make better use of Building Information Management systems, Virtual and Augmented Reality, data analytics, drones, autonomous vehicles and other new technologies.

It is clear that the future city will look very different from what we see today. Yet I am hopeful that if we employ the ideas discussed here, it can be a much more liveable city.

[3] Surbana Jurong is the engineering consultant for the major tunnels at Changi Airport Terminal 5, which will include facilities such as people mover system, baggage handling system and common services. Surbana Jurong is also involved in the soil improvement work for the third runway.

[4] As the engineering consultant, Surbana Jurong is responsible for designing and supervising the construction of the 222 caissons, each of which is the size of an apartment block. This will create a 8.6km long wharf structure to cater to the largest container ships.

[5] Surbana Jurong has been involved in Jurong Island in various roles as master planner, technical consultant, project manager and as the Jurong Rock Cavern operator.

[6] Surbana Jurong has been providing such smart city services to all the Town Councils in Singapore.

Perspectives, developed by SJ Academy, is our platform to explore new ways of tackling some of today’s most complex challenges. We draw on ideas and opinions from our staff associates and experts across different businesses. Click here to read more about Technology & Innovation, Infrastructure & Connectivity, and Design Leadership.