How Climate Change Will Affect Designs 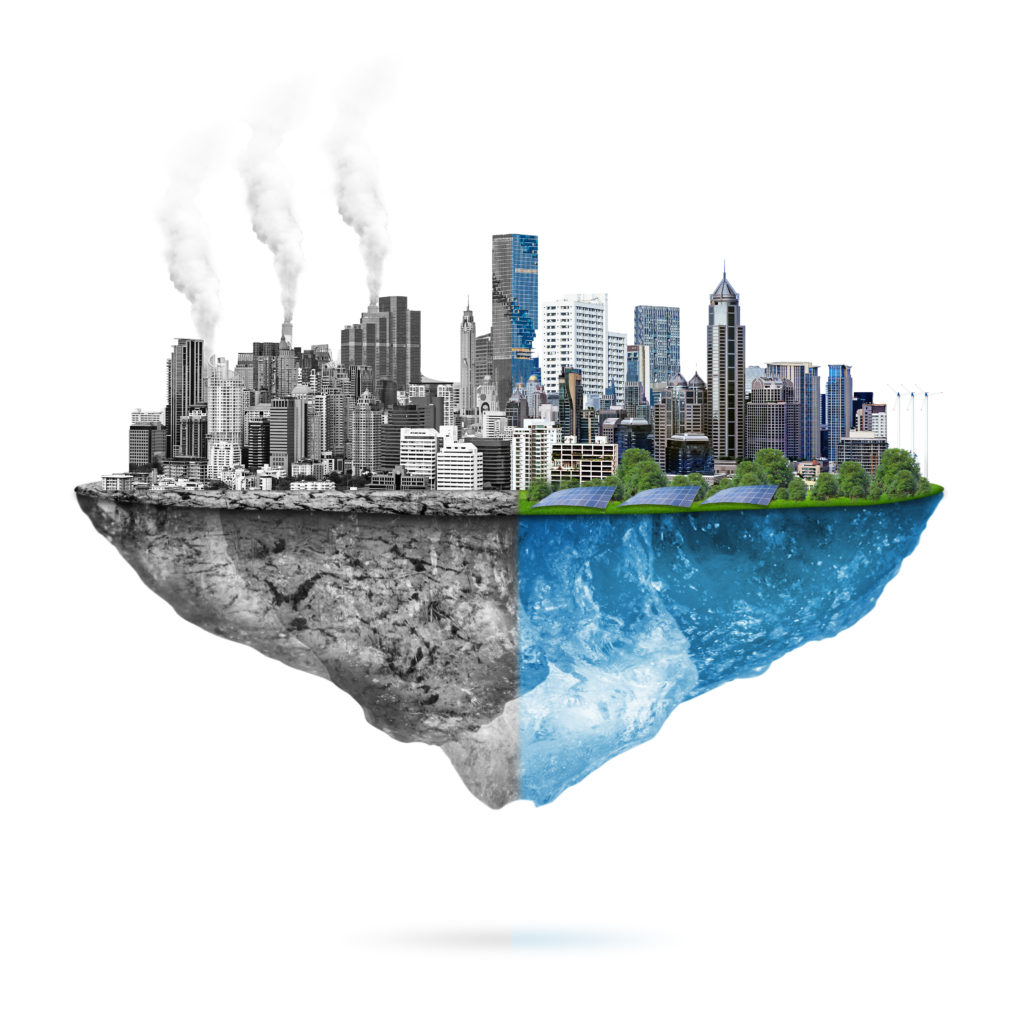 Rising temperatures is a global phenomenon, when weather patterns become erratic and unpredictable. For a moment, we hear news of certain geographical regions experiencing torrential rains with flooding, and the next, countries having extreme heatwaves and out of control bush fires that turn into fire storms.

The threat that climate change poses is self-evident. And the cause of such extreme temperatures is the emission of carbon dioxide (CO2) into the environment, through activities that require very high energy consumption, such as greenfield developments, burning of oil and gas, and vehicle carbon emissions. CO2 traps solar energy in the environment, which results in heating the planet.

Urban planners and developers are responding to these changes by building more sustainable and resilient buildings, cities and infrastructure. There are several rating tools that help guide urban planners design more environmentally friendly buildings, while aiding developers and operators improve the management and operations of the buildings’ life cycle.

Future Proofing Building Designs
When designing buildings, planners will need to consider both the occupants’ heat load and extreme external temperatures – which means that existing services may be taxed heavily and highly strained with the additional heating or cooling load needed. Buildings designed for super low or net zero energy are faced with hotter or colder climates, and these require fair amount of localized heating or cooling in work areas.

Versatility in weathering extreme temperatures would also mean that buildings should also be equipped with good flood protection systems, as well as the ability to resist fire storms. This can be an inexpensive hump or ramp over basement entrances, or sophisticated flood barriers that will rise up to prevent flood waters from entering the building.

Building Elements to Withstand Higher Wind Speeds
Been on a cruise vacation and opened one of the balcony doors? The mechanism of the doors, windows and sealing system are quite different from your ordinary window system. This is because the wind force in the open sea is higher than the ones on land. However, these mechanisms have already been used at buildings near the sea, or even very tall building structures. In the years ahead, when the occurrence of gale force winds increases, such locking mechanisms will become more prevalent.

In line with this, the building code will also have to change to cater for such gale force winds. In 2019, Singapore experienced a mini tornado inland that resulted from a water spout coming on land, ripping roof coverings and pushing anything that was not weighted and nailed down. Such high force winds will also create difficulty for landing aircrafts. Buildings will have to be designed to consider such gale force wind as well as locking down loose furniture that may potentially become deadly projectiles.

NZEB and SLEB Designs
Net Zero Energy Buildings (NZEB) and Super Low Energy Buildings (SLEB) will be common designs because not only are they energy efficient, they have much lower carbon footprints and contribute to an overall better work environment (refer to Illustration 1). In Singapore, some districts are designed to conserve as much as fifty percent of energy, with some slated for NZEB or SLEB, and this leads to a review of current design practices. There are already intentions for new precincts to have these ambitious requirements in place.

An example of NZEB/SLEB feature would be the use of roof space which is usually constrained by the foot print of the land. This is usually jostled to contain maintenance & engineering equipment, but will need to be configured to house photovoltaic cells. One-on-one replacement of greenery will need to be allotted space at the facades – which can also double up to contain photovoltaics. Perhaps, there will be more sky gardens to replace the displaced land plot greenery.

Vertical Farming for Food Security
In early 2020, the eastern part of Africa experienced an apocalypse – swarms of desert locusts descended and attacked food crops and flattening farms, causing an unprecedented threat to food security. This part of Africa has been known for having extremely dry climate conditions, and this can go on for years without heavy rain until the sudden slam by powerful downfalls – which resulted in this chain of catastrophes.

To get around problems of naturally grown food crops, we will need to consider these activities to be undertaken indoors with nutrient transferring technology being enhanced year-on-year (refer to Illustration 2). There will be less need for soil, as hydroponics technology increases the chances of yield and the climate internally can be controlled. Food towers can also be made available to fish, poultry and other daily farming necessities. 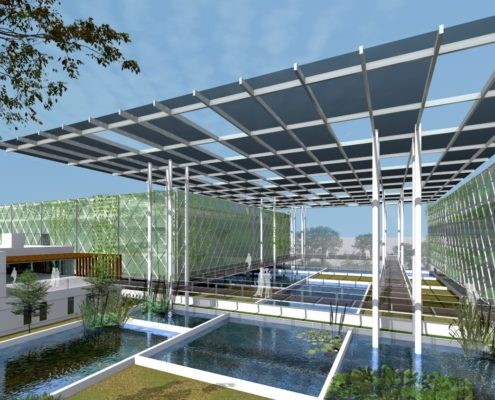 Illustration 2: A high-intensity vertical farming concept that can be applied to fish, vegetable or other agricultural products.

The Need for 5G and Light Fidelity (LIFI)
Because weather patterns do affect data streaming, there will be an increased need to have back up technologies to supplement the current networks. While 5G is a stone’s throw future away, it runs strictly on a narrow bandwidth.

LIFI system, on the other hand, has a wider bandwidth and is able to stream data directly from visible light spectrum and infrared. With 5G and LIFI combined, high speed data communications can very well provide the required networks during adverse weather conditions.

Artificial Intelligence in Building Management Systems
When the weather systems become erratic, Mechanical, Electrical and Plant (MEP) systems will be put to strain for what was originally designed with a certain standard range. The plant and equipment must contend with warmer and dryer climate and at the same time, having more fresh air intake above what was intended for.

With Artificial Intelligence (AI) introduced in Building Management Systems (BMS), the systems will be able to call out more output from MEP systems, and has the ability to scale back when the weather is back to normal.

SJ is taking this one step further through using AI to manage internal air quality in an enclosed environment. This is done through the application of plant bio-filters in the form of green walls for offices. For instance, when IOT systems detect the increase of volatile organic compound (VOC) or CO2 in the office ambient, the system will be prompted to pump more nutrient-rich water into the green wall system. And this causes the plant bio-filter to increase photosynthesis activity (producing O2 in the air by taking in CO2), which in turn prompts microbes in the soil to absorb the VOC.

Reversible Designs and Building as Material Banks
There are studies in Europe, especially in the Netherlands, on recyclability in Buildings. Because of the scarcity of materials and the need to recycle as much materials as possible, there is a movement by European designers to consider buildings that can be used for multi-generations, multi-functions, as well as reusing the materials in the building.

An example of the recyclability concept is the Circle Pavilion in Amsterdam – which uses “Buildings As Material Banks (BAMB)” to identify and facilitate the reuse of components from existing buildings (refer to Illustration 3). The building block materials are not cemented together with wet trades. Instead, they are bolted together, dry jointed or have special fixtures and connectors to help speedy assembly and disassembly of the materials. The specifications, disassembly procedures, material details and manufacturing information are all captured in block chain and in BIM models. 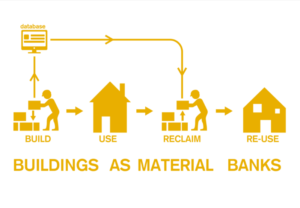 Lightning Protection
Singapore experiences one of the highest lightning activities in the world, with an average of 180 lightning days a year. Each square kilometer of land in Singapore can be struck up to 16 times annually. This would mean that when designing lightning protection for operations, buildings and the inhabitants, there is a need to be extra careful to provide the necessary protection – in the form of covered walkways, sheltered over ground pedestrian and underground networks to keep the city’s inhabitants safe.

The Singapore Standard SS 555 (2018) Code of Practice for Lightning Protection stipulates the use of Lightning Risk Assessment to determine proper levels of protection measures to be installed.

With the use of BIM, SJ’s Digital Management Office has developed a script to allow computers do the heavy lifting. An algorithm is built to emulate the “Rolling Sphere” (refer to Illustration 4) – a method to determine lightning protection zones which indicates areas that are highly unlikely to get struck – and this is based on simple mathematics and geometric operations. This will minimize (or remove) human errors and provide Engineers with a holistic solution and visualization of the Lightning Protection Zones to enable them to make informed design decisions. 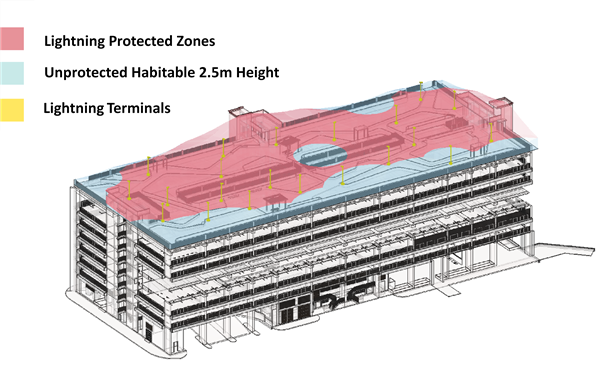 For the construction industry, carbon accounting starts from knowing the level of carbon output when constructing a building, commonly referred to as embodied carbon. Based on a materials quantity schedule, corresponding carbon unit rates will be applied to the material schedule and the carbon quantum extended and summed up. This can be expressed on a kg/m2 GFA. SJ, together with A-star, is building a carbon calculator for Singapore and the region to accurately calculate the embodied carbon in the building.

Designing Out Diseases
Finally, building designs of the future will need to consider diseases and the widespread of viral infections such as Dengue Fever and COVID-19 – which are indirect causes of climate change. The new SJ Campus is designed in different fingers separating office personnel. Though there are common collaboration spaces throughout the campus, it is convenient to isolate one block or one floor, in the event of a disease breakout.

Conclusion
We can deduce that Climate Change will certainly change the way we approach design and how we spec out a building. The works of an architect, engineer, or quantity surveyor will be affected in one way or another because of this extreme change in weather patterns. The way we operate will also be affected and if we do not start making changes to the way we design, the exponential effects of climate change will be quicker than the rate of change in buildings that are already worn out.

The time to change the way we design is NOW.